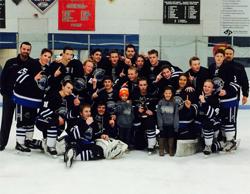 The Colorado Thunderbird U16 American team captured the Littleton Thanksgiving Tournament Major AA Division title this past weekend in Colorado.  The team faced some tough competition in pool play posting a 4-0-1 record and outscoring their opponents by a 20-5 margin landing them in 3rd place heading into the semi-finals.  They faced the 2nd seeded in-state rival Roughriders and took no time putting points up on the board defeating them 4-1 and sending them home.  Moving to the championship game the Tbirds faced the home team Littleton Hawks.  The Hawks took the lead near the end of the 1st scoring a power play goal.  The Tbirds however wasted no time in the 2nd answering with two quick goals only a minute apart and then did a great job holding off the Hawks for the remainder of the period to head in to the ice make with a 2-1 lead.  Both teams came out strong in the 3rd but the Tbirds buried another one with only 5:00 left in the game.  Feeling comfortable with a 3-1 lead with only minutes left, the Tbirds let up a little allowing the Hawks to score two quick goals to tie the game 3-3 and sending the game into overtime.  This latest championship happened in dramatic fashion with a Tbird power play goal scored with 8 seconds left in the OT period to take home the “Bronze Hawk” trophy.  The U16 American team will head to LA on the 1st of the year to compete in their third showcase of the season.  Go Tbirds!!!