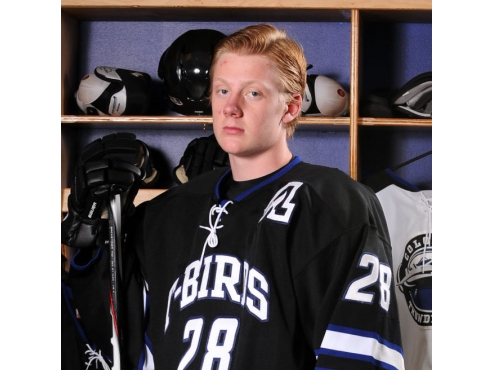 The Colorado Thunderbirds program is pleased to announce that Fredrick Olofsson has committed to play college hockey for the Colorado College Tigers of the WCHA starting in the fall of 2014 or 2015.  Freddy was born in 1996 in Helsingborg, Sweden.  He is a forward playing for the Colorado Thunderbirds U16 team.  Since moving to Colorado four years ago, he has been a member of the Thunderbird program since 2009 playing under Coach Ricci this season, "Freddy has developed into a blue chip prospect.  He has a natural feel for the game and makes everyone around him a better player.  The sky is the limit with his potential.  CC is very fortunate to be getting such a terrific young man that is also a terrific student," said Angelo Ricci, Director of Hockey Operations/U16 Head Coach.  The Thunderbird organization continues to provide an avenue for the elite student-athlete to develop and advance to the highest levels.  Freddy eventually will join former Thunderbirds, his brother Gustav, Jaccob Slavin and Christian Heil at CC.  He is the son of Hakan and Ulrika, natives of Sweden, but now living in Colorado.