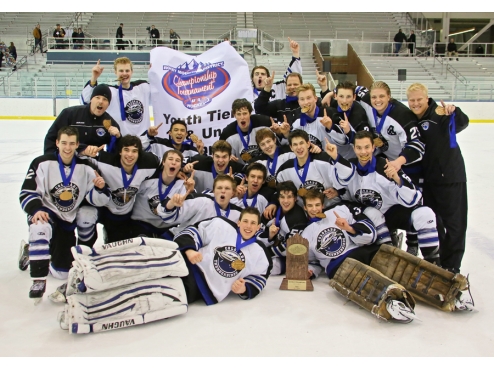 The Colorado Thunderbirds U18 team went 4 and 1 to win the Rocky Mountain District Championship in Provo, UT, this weekend.  The team started out strong by not allowing any goals against as they beat the CHA Rams 6-0 and DYHA Firebirds 6-0 in their first two games in the series.  They then lost a hard-fought battle against the Dallas Stars 3-2 in the final round robin contest.  Head Coach Dave Fromm and assistant coaches Nick Hantge and Ian MacClure stated that they were proud of the boys and their efforts as they didn’t dwell on this loss, but got back in the series by winning the next game in double OT against the Rampage 3-2.  The U18 team went on to defeat the Dallas Stars in the Championship game with a 2-1 victory.

The Colorado Thunderbirds U18 team advances to the USA Hockey National Championship in Pittsburgh, PA, April 3-7.  Good luck in Pittsburgh!

The Thunderbirds U16 team tried to make it a perfect sweep but came up short losing in a hard fought battle in overtime to the Dallas Stars 2-1.  The Tbirds finished the season 64-6-1.