U12 and U11 Capture SuperSeries Championships 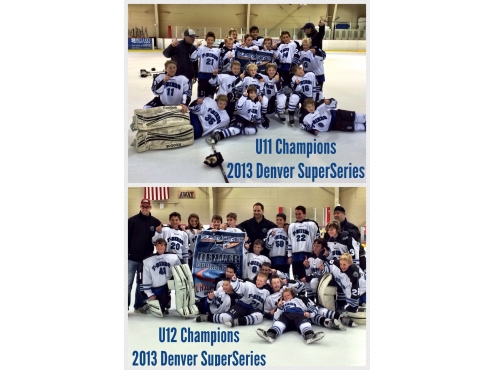 The Colorado Thunderbirds congratulate both the U12 and U11 teams on capturing the SuperSeries Championships which we hosted over the past weekend (Sept 27-29).  The two teams combined to go 12-0, both teams were a perfect 6-0 on the weekend.

The U12 Colorado Thunderbirds finished undefeated which resulted in them winning the Denver SuperSeries at the Ice Ranch. On Friday, they beat the Kansas City Jr. Mavs 9-1 and Littleton 13-0.  They followed that up with victories over the Phoenix Firebirds 14-1 and HC Dallas 9-1.  Sunday morning they beat the San Jose Jr. Sharks 8-0.  In the Championship Game on Sunday afternoon, they beat HC Dallas 7-0 to claim the title.

The younger U11 Thunderbirds followed their big brothers and capped off the weekend in fashion by winning the SuperSeries as well.  On Friday, they really got the scoring going against the Atlanta Fire and the Chicago Bruins.  They put 10 goals on each team and allowed only one against the Bruins.  On Saturday, the young tbirds faced stiff competition from the K.C. Mavs and the Jr. Coyotes but prevailed 4-3 in each contest behind amazing play from their forwards and some stellar goaltending.   Sunday morning the boys had to hold off a feisty Phoenix Firebirds group to put them in the finals for a rematch against the Jr. Coyotes.  This time, behind a total team effort, the boys scored early and often earning their first championship of the year by a score of 6-2.  This group is off to a very strong start as they work to become a great team.