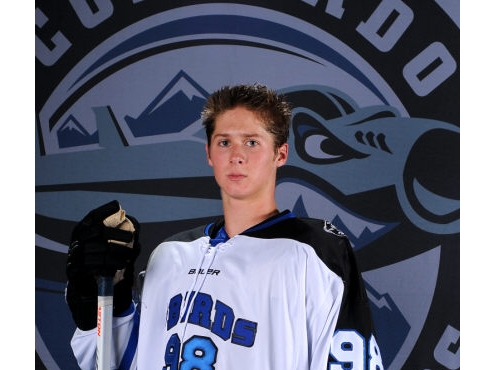 The Colorado Thunderbirds are pleased to announce that U16 forward Zachary Walker has been invited to attend the 2014 USA National Team Development Program (NTDP) Evaluation Camp from March 21 - 25 in Ann Arbor, MI.  “The Thunderbirds are proud that our highly nationally ranked program continues to provide an environment that is advancing players to the NTDP,” said Angelo Ricci, U16 Head Coach and Director of Hockey Operations.  “It is a credit to our players, the Thunderbird coaching staff and our program.  We wish Zach all the best as he competes to earn a spot on the U17 team for the 2014-2015 season,” added Coach Ricci.  Walker is expected to be selected in the USHL Futures Draft in May.
Former Colorado Thunderbird players who have played or been selected for the NTDP team in Ann Arbor are Sean Lorenz (TBirds 2004-2006, Notre Dame College grad, current player with NHL's Minnesota Wild system).  Nick Shore, (Tbirds 2006-2008, Denver Pioneers Alum, signed by the Los Angeles Kings-NHL, -- currently playing for Manchester-AHL).  Gavin Stoick, (Tbirds 2008-2010, NTDP player 2010-2012, currently playing for Green Bay-USHL), Quentin Shore, (Tbirds 2006-2010, NTDP player 2010-2012 -- currently at the University of Denver, Ottawa Senators-NHL draft pick), Seth Jones (Tbirds 2006-2007 -- currently playing with the Nashville Predators-NHL) and Seth Swenson (Tbirds 2007-2009, who was offered a spot with the NTDP for the 2009-2010 season but signed with Portland of the WHL and is now playing for Lethbridge of the WHL).