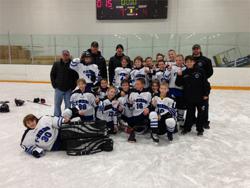 The 11U Tbirds played their best and most consistent hockey to date this season.  They have struggled against the in-state PW AA teams so far this season but it looks like they have turned things around.  Their goal was to play with passion and compete hard in all three zones.  The coaching staff stressed that they play their brand of hockey which is a fast paced, puck control and quick puck movement type of game.  They set those goals and were able to accomplish what the coaches asked of the players.  The staff also wanted to be a hard team to play against and ultimately won the tournament because of it.  The young Tbirds had a balanced attack with all three lines contributing along with some great goaltending.  The pw minor team seems to be playing some of their best hockey of the season and are hoping they can carry the momentum to their next event.  They will head out to St Louis in two weeks and face some very strong competition at the Super Series Showcase.  The coaching staff is very proud of how their boys came together.  Good luck team!