U16 Troy Terry Commits to DU 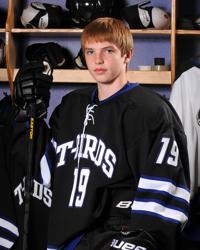 The Colorado Thunderbirds are pleased to announce that Troy Terry has committed to play Division 1 college hockey for the University of Denver in the WCHA.  His timeline on when he will suit up for the Pioneers is to be determined.  Troy, born in 1997, is a forward that plays for the Colorado Thunderbirds U16 team and is from Highlands Ranch, CO.

Troy has played in the Colorado Thunderbirds organization for five seasons playing on the U12 Pee Wee Major for two seasons, U13 Bantam Minor, U14 Bantam Major and is currently a member of Midget Minor U16 team.  “Troy is a tremendously skilled and extremely intelligent hockey player.  He is a young man that has not even come close to reaching his potential as a player.  DU is getting a very special young man with a tremendous upside,” states Coach Ricci.  “As a program, the Colorado Thunderbirds strive to prepare and produce young athletes that are ready to take the next step in their career.  Troy is a fine example of the type of player that the Thunderbird program works to develop and move to the next level,” added Coach Ricci.  Terry is eligible for the USHL Futures Draft this May.