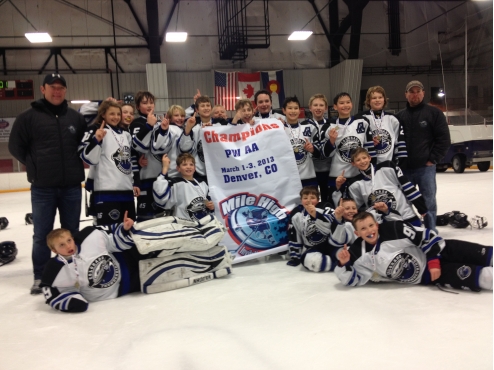 The U11 Colorado Thunderbirds stunned the opposition today in the Championship game of the “Mile High Invitational” at Big Bear Ice Arena. After going 4 and 0 in round robin play, the U11’s faced off against the DU Pioneers Peewee AA team in the final game. The U11’s had already beaten DU in the round robin by a 3-1 score. However, in the Championship game, the U11’s found themselves in a hole, down 4-1 with just over four minutes to play. The team would go on to score four unanswered goals, starting with a powerplay goal, then a minute later they scored a shorthanded marker, cutting the Pioneers lead down to just one goal, now 4-3.  The Tbirds continued to press and proceeded to tie the game at four with 1:34 left in regulation. With a heavy dose of momentum now on their side, the U11’s won a faceoff deep in the Pioneers zone.  The ensuing shot was blocked, but trickled past the DU netminder. 5-4 Tbirds stun the crowd and win in dramatic fashion with just 1.5 seconds left on the clock. The “Mile High Invitational” win capped off a tremendous season of U11 Thunderbird hockey where the squad finished with a 39-19-4 record over 62 games.