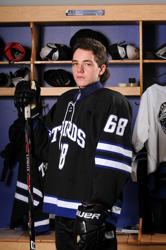 The Colorado Thunderbirds are pleased to announce that Michael Eyssimont has committed to play Division 1 college hockey for the St. Cloud State Huskies of the WCHA.  He is scheduled to become a Husky starting in the fall of 2015-2016 season.  Michael, born in 1996, is a forward that plays for the Colorado Thunderbirds U16 team.

Mikey has played in the Colorado Thunderbirds organization the past four seasons playing on the U13 Bantam Minor, U14 Bantam Major and Midget Minor U16 team the past two seasons. Eyssimont was the leading scorer in the Tier 1 Elite League this season.  “Mikey is a natural goal scorer with a very high compete level.  He has the ability to dominate a game and be a difference maker.  His game will  continue to evolve in Fargo of the USHL next season and eventually at St. Cloud, ” states Coach Ricci.  “The Thunderbirds main goal will continue to be a program that helps develop good players on and off ice the ice".  Mikey is the son of George and Nancy Eyssimont of Littleton, Colorado.