Avalanche To Retire Adam Foote's No. 52 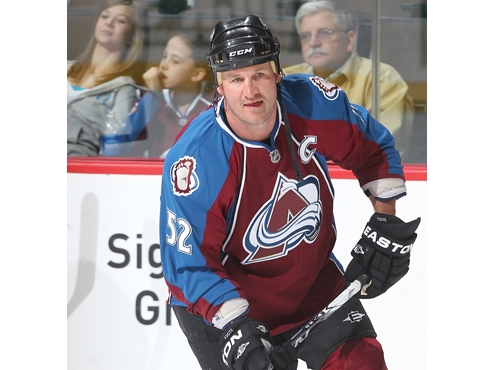 The Colorado Avalanche Hockey Club announced today that the organization will retire the number 52 in honor of former Avalanche defenseman Adam Foote. The Avalanche will raise Foote's No. 52 to the rafters at Pepsi Center during the 2013-14 season, game and date to be announced this summer.

Foote will be the ninth player in franchise history to have his sweater number retired, as the Quebec Nordiques retired the jerseys of Peter Stastny (26), Michel Goulet (16), Marc Tardif (8) and J.C. Tremblay (3).

Foote, 41, played 19 seasons in the NHL, 17 of those with the Avalanche/Nordiques franchise. He was a member of Colorado's 1996 and 2001 Stanley Cup championship teams and helped the franchise capture an NHL-record nine consecutive division titles from 1995 to 2003. Originally selected by Quebec in the second round (22nd overall) of the 1989 Entry Draft, Foote appeared in more regular season (967) and playoff games (170) than any other defenseman in franchise history.

Overall, Foote amassed 308 points (66g/242a) and 1,534 penalty minutes in 1,154 career games with Quebec/Colorado and Columbus. The blueliner was a combined +99 throughout his career. Foote also appeared in 170 career playoff games, second to only Sakic (172) in franchise history.

Foote is still the second-highest scoring defenseman in Avalanche/Nordiques history with 259 points (56g/203a) in 967 games. He is a combined +129 in an Avs sweater, the second-highest plus/minus number in franchise annals behind Forsberg (+210).

Prior to turning pro, Foote spent three seasons with Sault Ste. Marie, where he was named to the Ontario Hockey League's First All-Star Team in 1990-91. He helped the Greyhounds reach the Memorial Cup in 1991.