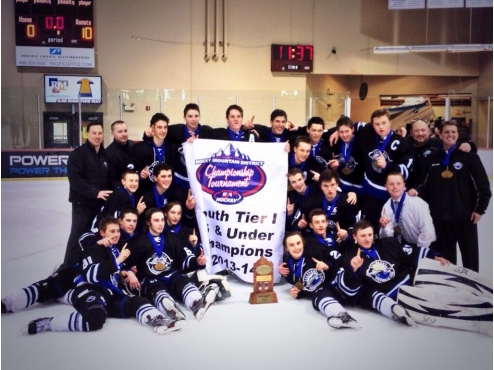 The Colorado Thunderbirds U14 team went 3-0-2 to win the Rocky Mountain District Championship in Scottsdale, AZ this weekend.  The team competed hard each game and saved their best effort for their final two games. They defeated the Phoenix Coyotes 4-3 in double overtime after trailing 2-0 in the semi-final game.  In the championship game, they discarded the Arizona Bobcats 3-0 to capture the RMD title.

The Thunderbirds U16 team went 5-0 to win the Rocky Mountain District Championship in Scottsdale, AZ.  The Tbirds outscored their opponents 44-4 in those five games.  During round robin play, they skated past the Arizona Bobcats, Texas Tornado, Utah Regulators.  In the semi-final game, the Tbirds beat the Phoenix Coyotes 8-0.  They squared off against the Bobcats for the second time in the title game and won by the score of 10-0.

The Colorado Thunderbirds U14 and U16 teams will both advance to the USA Hockey National Championship in Green Bay, WI, April 2-6.  Good luck Tbirds!