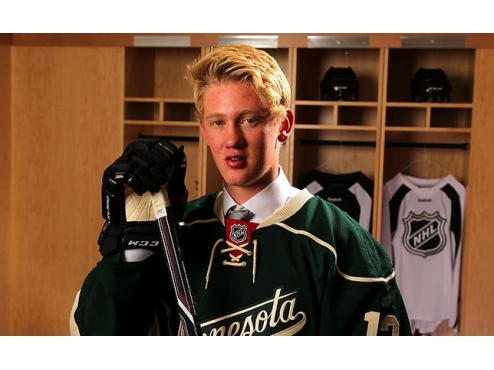 The Minnesota Wild has signed Tbird alum Gustav Olofsson to a three-year entry level contract starting with the 2014-15 season. Olofsson, a defenseman, was Minnesota's second-round (46th overall) pick in the 2013 NHL Entry Draft. He will report to the Iowa Wild in the American Hockey League (AHL) later this week on an amateur tryout (ATO).  Gustav played for three seasons for the Tbirds from 2009-2013.

For the complete release, http://wild.nhl.com/club/news.htm?id=710994&navid=DL|MIN|home

The Boras, Sweden native played one season at Colorado College, scoring four goals and four assists in 30 games. Olofsson's season came to an end against North Dakota in the National Collegiate Hockey Conference quarterfinal round. In the three game series, the 6-foot-4, 191-pound blueliner tallied an assist. He was named to the NCHC Academic All-Conference Team.

Olofsson helped lead Sweden to a Silver Medal at the 2014 IIHF World Junior Championships in Malmo, Sweden. Ranked tied for second in scoring amongst defensemen in the tournament with five points (1-4=5), and earned a plus-5 rating.

Before his freshman season at CC, Olofsson skated for the Green Bay Gamblers in the United States Hockey League scoring 23 points (2-21=23) with a plus-11 rating in 63 games.He was named to the USHL All-Rookie Team and played in the USHL/NHL Top Prospects Game.

Best of luck to Gustav and his family as he continues his career.